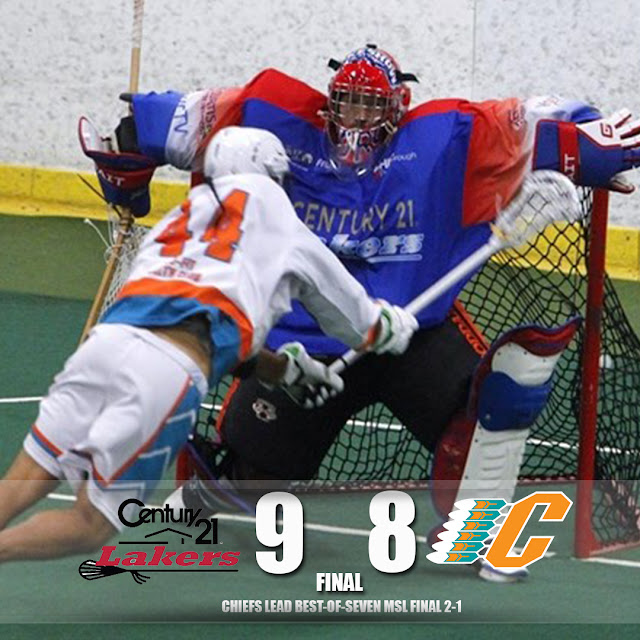 Kyle Buchanan played the role of hero Thursday night, scoring with just under two minutes to play in regulation time, to give the Peterborough Century 21 Lakers a 9-8 win over the Six Nations Pro-Fit Chiefs at the Evinrude Centre.
The win gets the Lakers back into the best-of-seven Major Series Lacrosse final series. The Chiefs lead 2-1.
Dhane Smith led the way with a goal and three assists for the Chiefs, while Tehoka Nanticoke netted a pair of goals. Shayne Jackson, Ian Mackay, Chris Cloutier, Jordan Durston and Tyson Bell all added one each.
Buchanan led the Lakers with the winning goal along with five assists. Holden Cattoni and Mark Matthews scored two goals, while Shawn Evans, Joe Resetarits, Kiel Matisz, and Matt Gilray scored one goal each.
Matt Vinc got the start for the Lakers, and made 35 saves, while Doug Jamieson replaced Dillon Ward midway through the second period. Jamieson made 22 saves, while Ward made 20.
Game 4 of the MSL is set for Friday at the Iroquois Lacrosse Arena at 8pm. Game 5 is Tuesday back in Peterborough.