Staats and Jamieson lead Chiefs over Excelsiors after deal with Brooklin 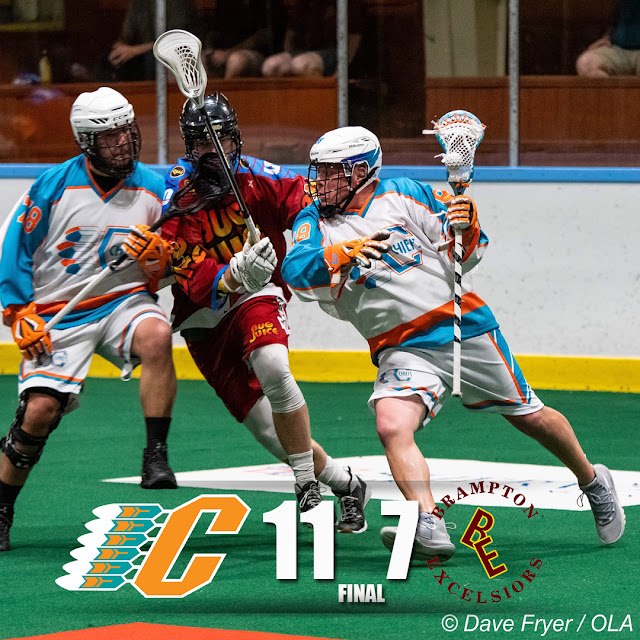 Randy Staats and Cody Jamieson have been a great one-two punch so far this Major Series Lacrosse season.
While Jamieson scored one goal and had six assists, Staats scored five times and added one helper as the Six Nations Pro-Fit Chiefs earned a 11-7 road win over the Brampton Excelsiors Thursday.
The Chiefs got two goals Staats, while Jordan Durston, Leland Powless, and Brendan Bomberry netted one goal each in the opening 20 minutes and never looked back.
Wayne VanEvery and Jamieson scored in the second period, while Staats caught fire in the third period scoring three times. Tyson Bell added one more.
Dallas Bridle led the Excelsiors with two goals, while Jeff Teat, Clarke Petterson, Connor Sellars, Phil Caputo and Tanner Thomson netted one each.
Doug Jamieson again was solid between the pipes for the Chiefs to earn the win.
With the win, the Chiefs improved to 7-2, and sit in second place, two  points behind the Peterborough Lakers.
The Chiefs long week continues this evening, with another road game, this time in Oakville against the Rock at 8pm.

CHIEFS ACQUIRE JACKSON IN DEAL WITH BROOKLIN
Earlier in the day Thursday, the Chiefs swung a deal with the Brooklin Lacrosse Club. The Chiefs received Shayne Jackson in exchange for the playing rights of Ryan and John Wagner.
Jackson, who also stars in the National Lacrosse League with the Georgia Swarm. He had been in Brooklin’s lineup the last several years. Though he’s a Bowmanville native he’s living in Georgia now as he’s also focused on his NLL/MLL career (Atlanta Blaze and Swarm)
.
As for the Wagner brothers, they’re from Niagara on the Lake, but will be living and working in Toronto. Ryan Wagner, a 25-year-old who has played the past four seasons for various teams in the NLL, will not be suiting up for Brooklin this year as he’s recovering from shoulder surgery.
His 22-year-old brother John recently completed his NCAA field lacrosse career with Marquette University. He went on a tour of Asia following his graduation.