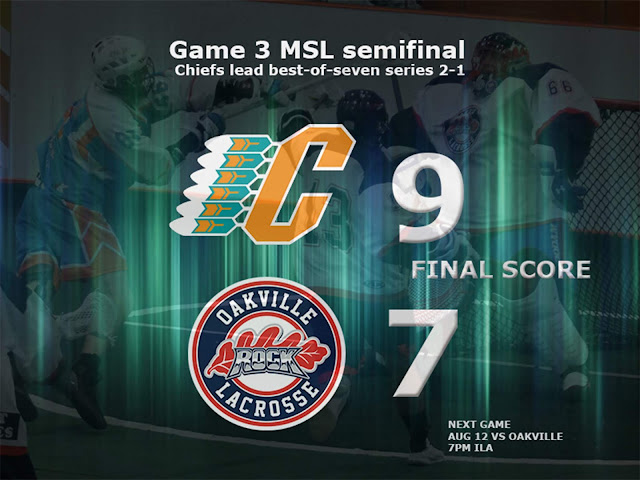 Randy Staats continued to shred up the Oakville Rock defence while Tehoka Nanticoke wove some of his magic, leading the Six Nations Pro-Fit Chiefs to a 9-7 win Thursday night at the Toronto Rock Athletic Centre.
The Chiefs now lead the best-of-seven Major Series Lacrosse semifinal 2-1.
After Brandon Slade opened the scoring four minutes into the first period, Kyle Jackson and Nanticoke quickly responded. Johnny Powless then tied things up on the powerplay, before Nanticoke scored his second goal of the period.
Special teams proved huge in the second period, with Staats scoring on the powerplay, before Tyson Bell and Staats netted goals while shorthanded.
In the third period, the Rock made a run thanks to a pair of goals from Powless and Jeremy Noble, while Matt VanGalen added one. Despite that, Brian Cole, Jerome Thompson and Nanticoke gave the Chiefs all the insurance they needed, while Doug Jamieson made 47 saves to preserve the win.
Nick Rose made 40 stops in the loss.
Sunday, the series returns to the Iroquois Lacrosse Arena for a 7pm game.