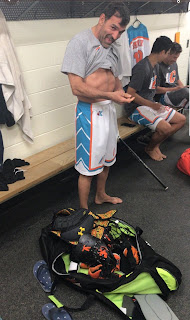 The Peterborough Lakers used a seven-goal third period to power itself to a 13-7 victory over the Six Nations Pro-Fit Chiefs Thursday night in Major Series Lacrosse action.
But before the game began, the short-staffed Chiefs created a buzz at the Peterborough Memorial Centre when offensive coach John Tavares suited up, wearing the No. 6 jersey. Despite a very impressive three-assist night, unfortunately for the Chiefs, the legend that many say is the greatest of all time, couldn't propel his team by their rivals.

Heading into the third period the Lakers' 6-5 lead didn't last long when Randy Staats netted his only goal of the game en route to a five-point night, tying things up early. And after Shawn Evans gave the Lakers another lead four minutes later, Dhane Smith scored his third goal and sixth point of hte night to tie things upless than a minute later.
Then the Lakers took over, with Turner Evans scoring a pair, while Nick Weiss, Bryce Sweeting, Mark Steenhuis and Jeff Swift added singles.
In the opening period, the two teams exchange goals. Jordan Durston and Smith scored for the Chiefs, while Kyle Buchanan netted a pair for the Lakers. 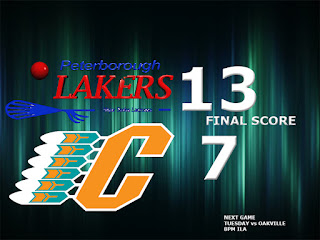 Durston, Smith and Tyson Bomberry then scored in the second period for the Chiefs, while Steenhuis, Swift, Turner Evans, and Thomas Haggarth gave the Lakers that lead heading into the third period.
Doug Jamieson got his third-straight start between the Chiefs pipes and faced a ton of rubber, making 51 saves. Down at the other end, Doug Buchan stopped 41 shots to get the win.
The loss drops the Chiefs record to 1-2 on the early season, while they wait for its reinforcements from the National Lacrosse League. Those players may come soon, with the Rochester Knighthawks and Saskatchewan Rush playing the third and final game of the NLL championship series Saturday in Saskatchewan.
Next week will be another busy one for the Chiefs. Tuesday they host the Oakville Rock before going back on the road to face the Brampton Excelsiors. Both games are at 8 p.m.
WEBCASTS
Tuesday's game will again be streamed, CLICK FOR YOUTUBE CHANNEL this time on a new improved system. Once again, we would like to thank Dreamcatcher Charitable Foundation for sponsoring the free webcasts. We are still looking for sponsors to keep the webcasts free. If you would like to help, contact Darryl Smart at darrylsmart1@yahoo.ca.