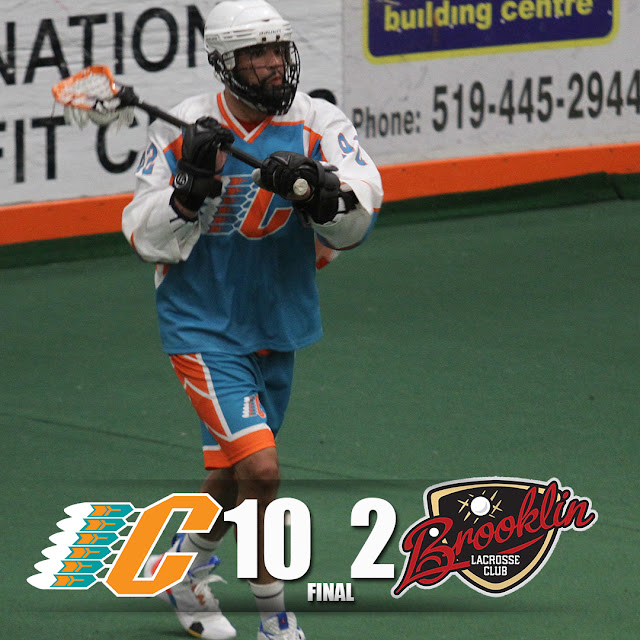 The Six Nations Pro-Fit Chiefs flexed its offensive muscle Tuesday night at the Iroquois Lacrosse Arena, with a 10-2 victory over the Brooklin Lacrosse Club.
Randy Staats opened the scoring with a pair of goals, before Travis Getz got Brooklin within one. But Lyle Thompson wove his magic, scoring teh first of his three on the night with time winding down in the first period.
The Chiefs continued to roll in the second period, with Kevin Brownwell, Thompson and Cody Jamieson extending the lead.
Connor Kearnan had the lone Brooklin response on the powerplay.
The Chiefs offensive train kept coming in the final frame, with Ethan O'Connor, Dhane Smith, Jordan Durston and Thompson adding to the final score.
While the offence was showcasing itself, so was the defence, led by Doug Jamieson between the pipes. Jamieson made 36 saves to earn his league-leading ninth win of the Major Series Lacrosse season.
The Chiefs now take sole possession of first place with its 10-4 record. Sunday they hit the road for a 6pm game against the Coburg Kodiaks, before hosting the Peterborough Lakers in a showdown for first place. That game at the
ILA begins at 8pm.